VietNamNet Bridge – The hill town of Da Lat has long been the most popular location in the region for getaway holidays since French colonial times.

Situated on a plateau 1,500 metres above sea level, this retreat town offers a good change of atmosphere with a refreshingly cool climate while other cities in Vietnam can be very hot and humid especially during summer.

Da Lat is famous for its wide variety of flowers, vegetables and fruit from its surrounding farmlands as well as countless nature sites; its beautiful landscape, evergreen forests and minority villages.

The area’s main sources of income are from agriculture and the tourism industry but the city is also very proud of being an education centre that produces multi-field professionals each year including doctors and architects.

Da Lat features many interesting landmarks. Its lakes and waterfalls have long stood out as some of its top attractions while Emperor Bao Dai’s Summer Palace and the Buddhist pagodas are equally popular.

Visitors can spot a good number of well-preserved French villas and chalets in the French Quarter located not far from the city centre. It’s relatively simple to get to Xuan Huong Lake and from there you can continue to visit many other sites in town by foot as they are quite close by.

The minority villages located nearby Dalat are a must for those wanting to see the ‘real’ Vietnam as the villagers are pretty much keeping their traditional ways of life extant.

Bao Dai was the last emperor/king of Vietnam and ascended to the throne in 1926. He was only 12 years old at that time.

With a reputation as a man who enjoyed parties and the good life, Bao Dai spent a good amount of time in Dalat. His summer palace was made up of three imperial buildings with the part called Dinh 3 being the best known and most visited.

Built in 1933, the restored palace is still furnished with a lot of its original furniture and fittings and offers a rich insight into the life of the royal resident. The parts that are open for the public are the emperor’s throne, office and bedroom, dining room and the empress’s quarters. Many portraits and sculptures of the royals are on display too. Photography is not allowed inside the building. 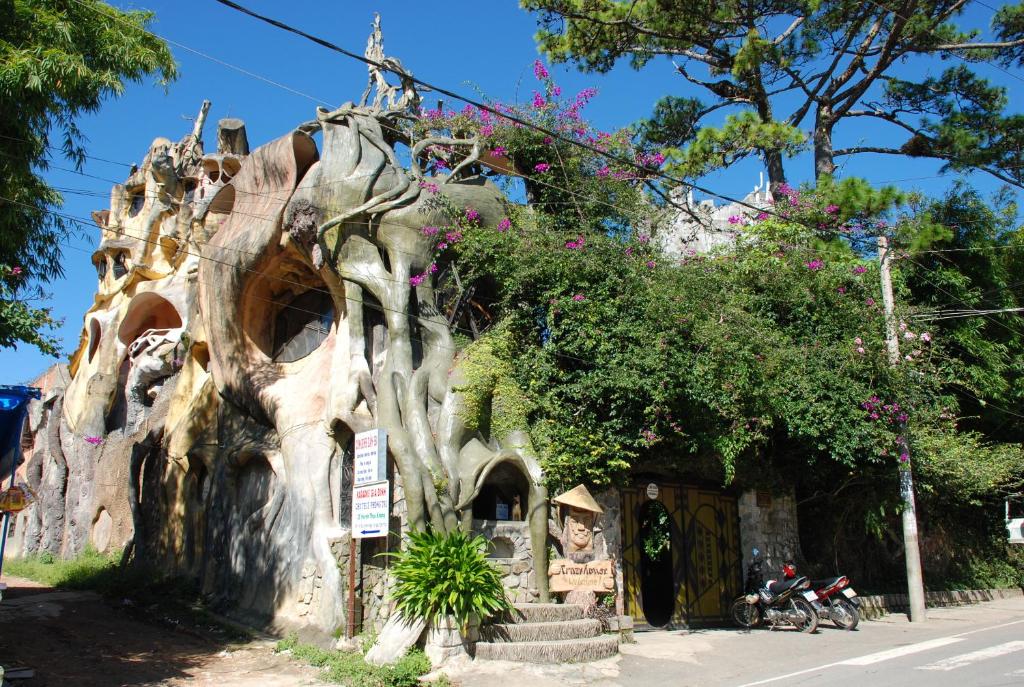 It’s hard to meet people who have visited Dalat and have not been to Hang Nga Guest House and Art Gallery, better known as the ‘Crazy House’ because of its bizarre concept and tree-like shape, designed by Dang Viet Nga, a Soviet-trained Vietnamese architect who first established it in 1990.

With a little over a dozen rooms, each with its own unique theme, here you’ll find tunnels, ladders, concrete kangaroos, tigers and bears. If you are lucky, you might have the chance to chat with the designer herself as she is usually there.

It’s hard to separate Dalat and flowers from each other as the city is well known for its variety of colourful flowers and plant species. It even has its own famous annual flower festival which has proven to be very popular with domestic tourists.

Established in 1966, the Dalat Flower Gardens are on the northern side of Xuan Huong Lake in the heart of the city and cover an area of about 7,000sqm. Orchids, hydrangeas, roses, pansies, mimosas and peach blossoms are among the 300 different kinds of common flowers displayed in the parks along with many more exotic flowers.

Some of the flowers blossom a few times in a year, meaning that the park always features lovely flora no matter when you visit, but summer is of course its peak time. Visitors can also buy beautifully arranged bouquets at the gardens.

Dalat Market is similar to many of Vietnam’s city markets and is an interesting place to spend a short while to feel the vibe of the real Vietnam. It is made up of more than 1,000 shops in a few multi-storey buildings.

The busy market offers interesting goods, especially local produce from wine to flowers, meat to handicrafts and cosmetics to strawberries, candy and household appliances. Basically you can find everything here including cheap winter cloths. Check out the market’s food court for local specialties.

Built in 1943, Dalat Railway Station is small but offers interesting original ticket windows with a wood-burning steam train. Visitors can also hop on for a short ride of about 5km following the historic line to a tiny village named Trai Mat and enjoy the countryside along the way. The train operates about five times per day and needs at least a group of four to five people to be able to make the trip. 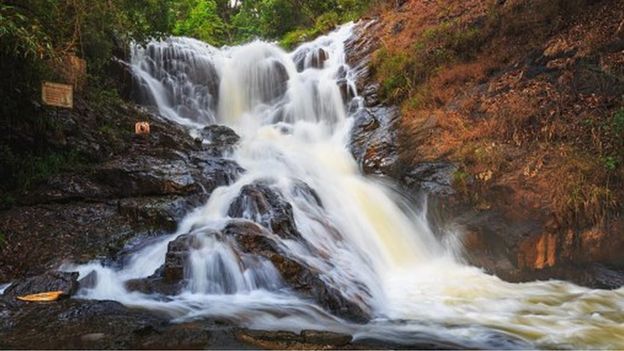 Datanla is no doubt one of the most visited waterfalls in Dalat and is conveniently located a few kilometres south of town. Sometimes ethnic K’Ho artists perform cong chieng here – a Vietnamese traditional instrument cast from mixed copper. Those who are looking for thrills should try the (mini) roller coaster ride from the top of the falls.

Location: A few kilometres south of town and three kilometres from Prenn Falls

This dramatic falls has its original name from the K’ho ethnic language and it means ‘elephant falls’ in Vietnamese. Because of its remote location it is relatively quiet, which can only be good as it also means less tourist buses. Check out the nearby Linh An Tu Pagoda – a peaceful retreat.

Location: Near Linh An Tu Pagoda in Nam Ha village (about 30km south of Dalat)

The Lake of Sighs, as its name suggests, is named after several sad tales of lovers. It was originally a natural lake but was enlarged by the French as a dam. Even though the name has unhappy connotations the Lake of Sighs is a popular destination for the Vietnamese, especially young couples. Paddle boats and motorboats take lovers out and away on the lake. There are horses and horse-drawn carriages to be hired too.

This small monastery is a mix of a religious site with a lovely garden and an art gallery ran by a kind of Zen monk/painter called Vien Thuc. He is unlike ‘normal’ Zen practitioners and is very energetic, able to chat with people in many languages including French, English, Swedish, Chinese, Thai and of course Vietnamese. His art collection might not be to everybody’s taste but certain exhibits are still very interesting. Some visitors find his operation a bit odd and un-Zen like, however others help spread the good word around. Many tour companies now include this place in their Dalat tour program. Visit the so-called ‘Mad Monk Temple’ to see for yourself.

You’ll know that you’ve arrived here when you spot the concrete chicken statue in front of the village.

A visit to this minority village is truly an eye-opening look into the simple life of ordinary Vietnamese people who lead a very basic lifestyle with simple housing, a small school, plantations and farms.

When not working on their land, many villagers work at home doing a bit of this and that to provide extra income for their families including traditional silk and cloth weaving.

Location: About 16km south of Dalat 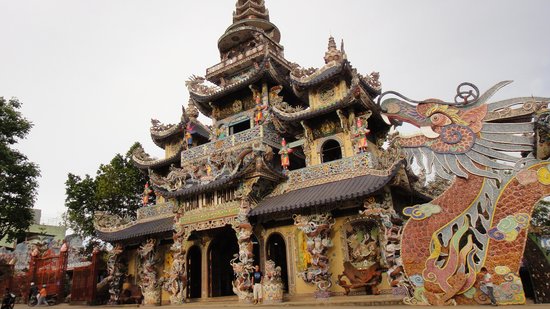 Linh Phuoc is one of the most well-known pagodas in Vietnam with a 37-metre bell tower – the tallest in the country. The main hall consists of colourful paintings regarding the story of Buddha from his birth until he obtained Nirvana and his death.

Linh Phuoc Pagoda’s surroundings are peaceful with small lakes and gardens but things can also get very busy with domestic tourists from time to time.

Location: At the end of Trai Mat Street

If you want to visit a non-touristic pagoda, try Linh Son Pagoda. It is more like a neighborhood place than an attraction. Also located on a hill overlooking Dalat, the pagoda offers contrasting views of the busy city on one side and the temple’s own tea and coffee plantations on the other.

It’s a common sight to see monks working in the fields, especially during the tea and coffee harvesting season.

These magnificent and powerful falls are 20 metres high in the mountains and about 100 metres wide in rainy season and are the largest falls in Vietnam. Visitors can hear the echo of the water falling into the lake from a long way away.

The impressive 10-metre high Prenn Falls is a major Dalat attraction, meaning lots of visitors come here, especially during public holidays and school breaks. Located about 10km from the centre of Dalat, Prenn Falls has a small cable car service but many people prefer to walk up the path behind the falls. It’s more fun but wetter that way.

Location: About 10km south of Dalat

Though it was recently built, Truc Lam Pagoda is popular and probably the prettiest and the best-kept shrine in Dalat. Located on Phuong Hoang Mountain by Tuyen Lam Lake, it features a cast bronze bell, a pagoda and many Buddha images. Go up there by cable car and admire the view from the top – it’s amazing.

Take a sneak peak of how the then influential people spent their summers during colonial times by visiting the French Quarter along Tran Hung Dao Road. Visitors will see many original French colonial-style villas and homes that were built around 1920s and ‘30s. Many hotels, golf courses and spas as well as schools and churches were built in the same period, most using French designs. This area is well maintained and many villas are now owned by nearby five-star hotels. 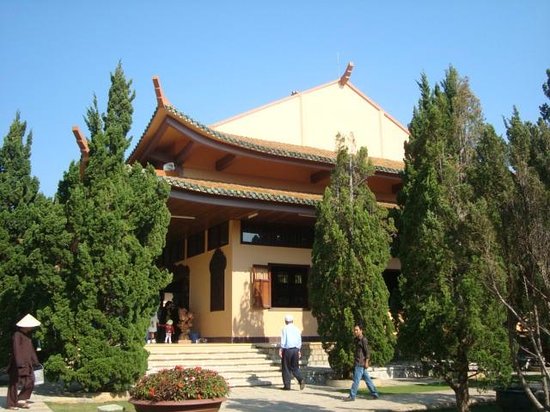 This pagoda was built by the local Chinese community so it’s sometimes referred to as the ‘Chinese Pagoda’. However the main focus of this monastery is not the pagoda but three historical Buddhist statues which date back to the 16th century.

As the name suggests, the Valley of Love Park is popular with Vietnamese newlyweds. It has rolling green hills, lakes and beautiful gardens and picnicking spaces. Youngsters like this place not only because of the small amusement park but for the western-like ‘cowboys’ with their fake guns, and wide hats.

The cowboys’ job is to actually offer horse and pony rides to customers as well as pose for photos with them. Some people even bring hammocks here and pass their time reading, napping and people watching. It’s a purely relaxing place that caters for all.

Another popular activity in the park is to go for a ride on the swan pedal boats around the lake. 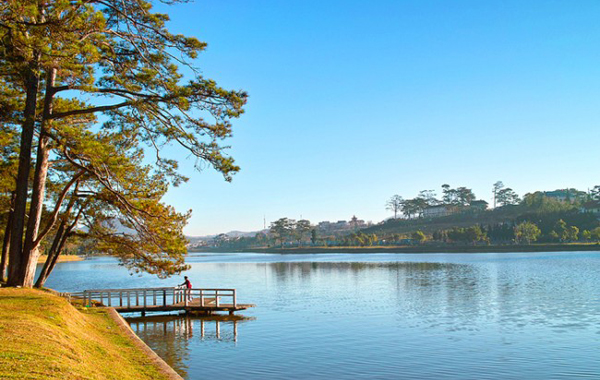 This manmade lake has become a major landmark. It has beautiful gardens with many flowering plants and trees. The beautiful reflection of willow and peach trees along the banks of the lake is part of Dalat’s charm and there are restaurants, cafés, shops, accommodation and a variety of business venues nearby, especially on the northwest side of the lake, considered the heart of Dalat. Here, locals enjoy picnicking, cycling and jogging, horse-cart riding and riding swan paddle boats as well as celebrating weddings.