Community-based tourism has brought many changes to the lives of residents in Da Bac district, one of the most disadvantaged localities in the northern mountainous province of Hoa Binh.

Hoa Binh, about 70km northwest of Hanoi, is home to several ethnic groups, including Muong, Thai, Dao and Tay. Of the total population, 60 percent belong to the Muong group. 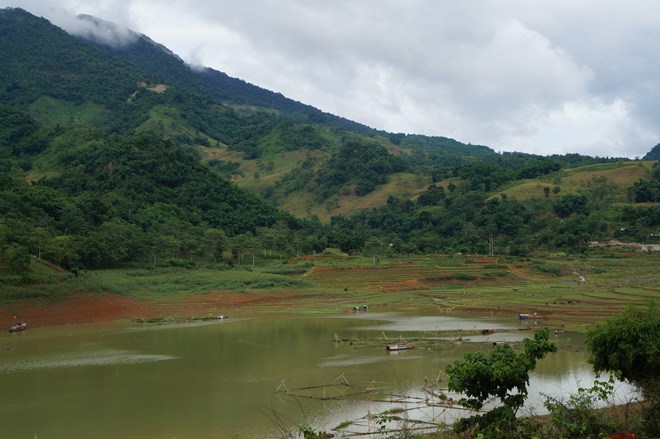 Community-based tourism in Da Bac started three years ago, first launched in October 2014 in Hien Luong and Tien Phong communes, about 40km away from Hoa Binh city. Compared to other localities in the province like Tan Lac and Mai Chau districts, where this kind of tourism was launched in the 2000s and attracts about 300,000 visitors per year, it was a late start.

A project to establish homestays in Da Bac was initiated by AFAP Vietnam, an Australia-based non-governmental organisation. Some households were invited to participate in the project and offered a loan with no interest to prepare tourism infrastructure and training. Five families decided to join, forming the five homestays of Huu Thao and Sanh Thuan in Hien Luong commune, Ngoc Nhem, Quang Tho and Dinh Thu in Tien Phong commune.

The participants were supported to build new accommodations for themselves and visitors. The traditional Muong-style wooden houses, looking onto Hoa Binh Lake, were set up in the orchards. Each house can accommodate about 15 guests. Homestay operators were also sent to other community-based tourism destinations in the north, notably Mai Chau in Hoa Binh and even Sa Pa in Lao Cai province, to learn about the model and find things to apply to their communities.

Since then, the district has witnessed various changes. Ngoc Nhem Homestay in Tien Phong commune was the first of the five to kick off their tourism business in the district. The owners Dinh Van Ngoc (31) and Bui Thi Nhem (30) recalled their first day on the job, being awkward with the first visitors and struggling to cook food to their liking. Each family encountered similar problems initially.

“Before the project was launched, we made a living by growing maize, cassava and catching fish in Hoa Binh Lake, like most of our neighbours. Despite the excess workload, we earned roughly one million VND (44 USD) a month and it was difficult for us to make our ends met. In addition, farm productivity heavily depends on weather and sometimes we suffered bad crops, so our income was unstable”, said Nhem. 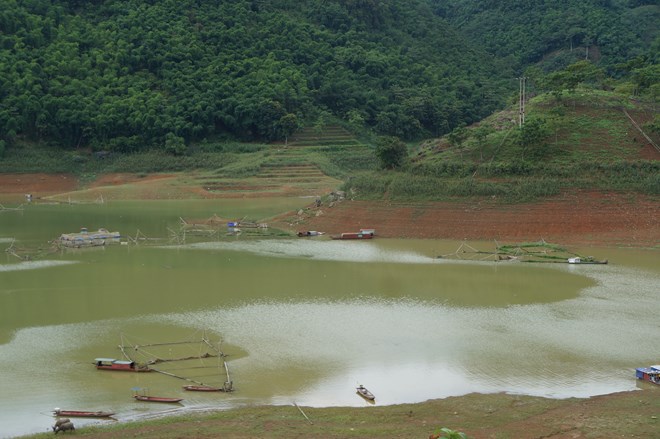 At first, only a few visitors went to the homestays. The number has been rising, especially since the 2017 Lunar New Year. Most visitors arrive at the weekend for a short trip, including families and students. One household serves an average of 30-40 guests and up to 100 visitors a month in peak time. Two new homes have recently been inaugurated in Sung hamlet of Cao Son commune.

Visitors are advised to make reservations because on days without guests, owners often leave their houses empty to work elsewhere.

When asked about her experience of running a homestay, Nhem noted that she has learned new things and met people from various places, even from abroad. The house is much cleaner as it has toilets and bathrooms. Now the district is a tourism spot and people are paying more attention to keeping their houses and communities clean. In addition, her household’s income has increased from receiving guests and selling local products.

“In my opinion, tourism development should be further promoted here and it is the right direction to enhance environmental protection and cultural preservation. I hope that more homestays will be opened to serve more tourists, especially guests that come in large group,” said Nhem. 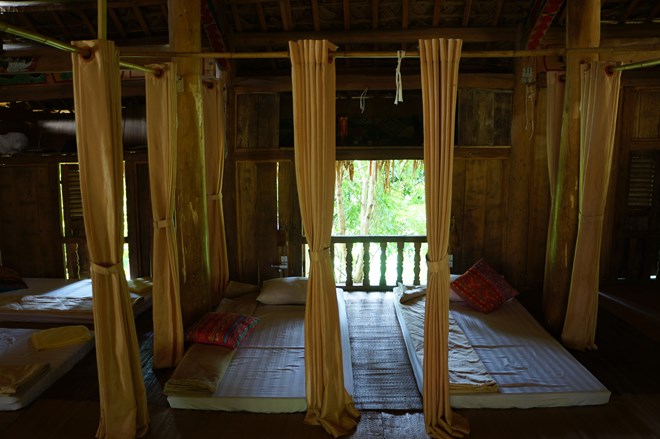 Agreeing with Nhem, Dinh Quy Huu (26), the owner of Huu Thao homestay in Hien Luong commune, said that more and more locals are willing to take part in community-based tourism. The homestays can be a focal point for selling local products such as fresh vegetables, fruits, honey and meat.

Moreover, many new forms of entertainment have been established like trekking and kayaking, creating more services and jobs. People are striving to improve their living standards, while maintaining the pristine landscapes of mountains, forest and lakes.

In 2016, homestays in Da Bac district received a total of 2,087 visitors, with 35 foreign tourists. The number of international visitors has jumped sharply, as the households served 197 foreign guests in the first six months of 2017.

Nguyen Van Hien, head of Da Bac district’s Culture Office, said that local people engage in community-based tourism in various forms. They are encouraged to grow fresh farm produce and raise cattle to supply homestays and visitors and though the current scale is moderate, authorised agencies plan to expand the model.

Among the homestay operators in the two communes, some are people in their 20-30s, able to adapt to new situations and use the internet and social media to improve their business.

With support from AFAP Vietnam, a company promoting Da Bac community-based tourism was established recently, drawing the participation of young people. The company, mainly responsible for bookings and marketing, is expected to promote the homestays and bring more visitors to the locality.

More importantly, homestays not only improve economic conditions of local people, they also help them realise the charm of their culture, Hien noted. In the context of international integration and globalisation, most visitors are struck by the beauty of lush green mountainous countryside and want to learn about local cultural identity.

Knowing the essence of Da Bac can be found only in the district, local people have put efforts into learning their history and culture and promoting themselves to visitors, through traditional costumes, dances and folk tales.